October brings us vibrant natural autumn colours, and those with a birthday in this month are lucky to have the equally beautiful opal as their birthstone.

As well as visual splendour, the world of Opal is also steeped in superstition, which is believed to come from the 1829 novel ‘Anne of Geierstein’ by Sir Walter Scott. In it, the Baroness of Arnheim, wears a beautiful opal which reflects her changing emotions. At the end of the story, some holy water falls onto it, its brilliance is quenched and she dies soon after. Other sources state that the diamond dealers of the 1800’s, on seeing the first shipments of Australian opal into London for cutting, were so shocked by its beauty they feared it would overtake diamond in popularity and affect their trade. Is it possible they helped in spreading a superstition of ‘bad-luck’. 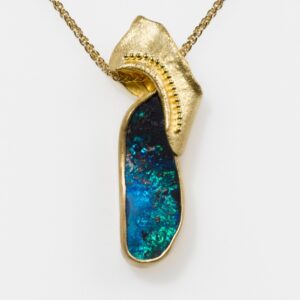 Some opals display every colour of the rainbow, others have a hue of blues, oranges or greens.

There are lots of different types of opal, but the one best known is from Australia. It is formed in dry regions, such as the Outback, from downpours of rainwater that contained dissolved silica. This water seeped below the surface into gaps in the ancient rock below.
I adore the terminology used by the opal hunter and gem dealers. There are hundreds of beautiful words to describe an opal’s particular display of colour; Peacock’s Tail Pinfire, Rolling Flash, Twinkle, Flame and Starflash – to name a few.

Other parts of the world produce opal in different forms. Mexican fire Opal, is a vibrant orange-bodied stone. The Aztecs called it Vitzitziltecpa, which means ‘hummingbird stone’, because it is similar to these birds’ shimmering feathers. 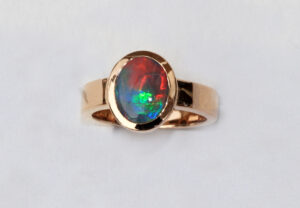 No two pieces of opals are the same, each stone is unique in colour.

Blue and pink Peruvian opals are found only in the Andes mountains. Their internal structure is such that they do not have a display of colour, but are highly prized for beads and carvings, and were believed to be a gift from Pachamama, the earliest Inca ‘Mother Earth’ goddess.

No two pieces of opal are the same. As a jewellery maker, these unique stones remind me of tiny worlds, miniature environments, or the colours and lights found in the natural world and my designs stem from this inspiration.