It might be no surprise to learn that January’s birthstone is a gem that is known by several names that make reference to its warmth, glow and fiery appearance. Garnet is a fascinating and varied gemstone, well suited to cheer and inspire all those born in this month.

The type of garnet we most recognise, large clear red gems, has been known since medieval times as ‘carbuncle’. This name originates from carbunculus which means ‘glowing coal’. The power of this stone, with its inextinguishable internal flame, has been documented throughout history, from Medieval texts and the Scriptures to the poetry of the First World War. In folklore, garnets are said to protect travellers on their journeys and were often exchanged between friends as tokens and promises that they would meet again.

Working with garnets as a jewellery designer is an absolute delight. the garnet family is found in a kaleidoscope of colours, surfaces and light-effects to use in infinite creative ways. Very occasionally a rare colour-change garnet is found. I dare anyone who ever has the good fortune to hold one, not to dash backwards and forwards between natural and artificial light to watch the amazing natural phenomenon of a colour-changing garnet. 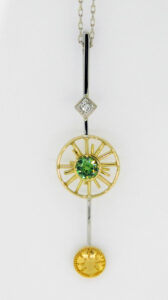 I rarely make pieces of jewellery for myself, but those that I do are very special to me. The pendant that I frequently wear features a rare green garnet at its centre. The stone is pale but vibrant with the exceptional sparkle. I had bought it many years ago, and as time went by, examples such as this became more and more rare. When I needed to make myself a special jewel, the stone was the perfect choice as a focal point. The piece is about the passing of time (a pendulum), the loss and remembrance of loved ones and lives cut short. It also makes reference to constant and universal natural elements of the sun, the contrast of warmth and cold (yellow gold and platinum) and the idea of eternity represented by the diamond at the top.

When it comes to a captivating fire to cheer us during the darkest months, garnets literally have it.