Those who are born in November are lucky to have the beautiful yet enigmatic gemstone topaz as their birthstone. The name Topaz derives from the Greek word for St John’s Island in the Red Sea (Topazios) where, it was believed, the pale yellow/green version of the stone was found and mined. Except we now know it wasn’t topaz at all, it was a completely different gemstone – August’s birthstone, Peridot.Some scholars believe that Topaz originates from the Indian Sanskrit language, specifically the word topas or tapaz, meaning ‘heat’ or ‘fire’. However, one of topaz’s distinctive physical properties is its low refractive index, meaning that the stone has a distinct lack of sparkle. Even facetted topaz stones do not twinkle as much as many other types of gem.

An antique ring that I have seen for repair has been created with a ‘closed back’ setting to the beautiful central pink topaz. The back has been lined with reflective foil to do the work that the gem can’t do; bouncing the light around. The effect is stunning, even after a couple of hundred years of wear and tear! 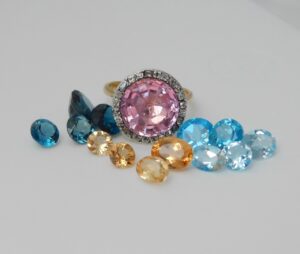 One advantage to its low refractive index is that any natural inclusions found within topaz are likely to be seen very clearly. Sometimes, as topaz crystals were forming, other minerals and gems grew inside as ‘inclusions’. These ‘ included’ topaz gems are polished to display the most beautiful view of the inclusions – like a window revealing a stunning landscape, kaleidoscope or dreamscape. 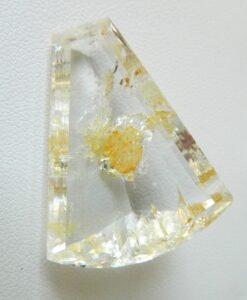 Natural ‘Imperial’ topaz is the most valuable and rare topaz. It is a distinctive pink or pink-orange. Currently it is found in the gem deposits in Brazil and Utah in the USA.

Unsurprisingly, there are conflicting stories as to how it was named Imperial topaz. One originates from nineteenth-century Russia. At the time, the Ural Mountains were a leading source of topaz, and the warm pink coloured gemstone mined there was named to honour the Russian Czar. Ownership of this finest of gem colours was restricted to the royal family.

An alternate explanation, dates from an 1881 visit by Brazilian Emperor Pedro II to Ouro Preto, near Brazil’s most productive topaz mines. Here, a rare pink/orange topaz was presented to him as a gift and this particular shade has since been described as Imperial Topaz. 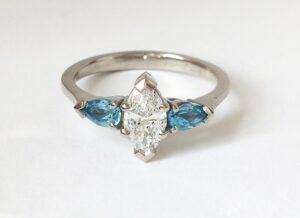 Folklore and myth surrounding topaz dates back thousands of years. The ancient Greeks believed it gave them strength; in Europe it was thought that topaz could break magic spells and increase memory and intellect. English superstition suggested if powdered and drunk with wine, topaz would cure insomnia. Following extensive research into these claims I have drawn several conclusions, but unfortunately I can’t remember where I left the results before starting on the all-night alchemy project.