In the world of jewellery, texture and pattern is a way of creating contrast, interest and description. It also comes and goes in fashion and trends. How many of us can remember the popular wedding rings or watch bracelets of the 1970s that were heavy yellow gold with a rough bark texture? Or 1980s bands and bangles that were spangled with a pattern of ‘diamond-cut’ reflective facets?

One jeweller who was particularly interested in the world of texture and came to revolutionise its use in jewellery was Andrew Grima. He was a truly original and innovative designer, changing the aesthetic of modern jewellery from figurative to abstract forms, often taken from nature. He caused a stir by developing techniques such as casting to form precious materials into unusual organic shapes. Over the years I have had the pleasure and privilege of restoring some of his work for my customers. Some have borne an uncanny resemblance to pencil sharpenings, miniature building blocks, and fireworks! They are all fascinating, exciting and individual.

In 1966 Queen Elizabeth II was given a brooch which turned out to be very precious to her – it soon became her favourite. It was given to her by her husband Prince Philip and made by Grima. She has often been photographed wearing it; it is a rich yellow gold, opulently textured, and set with rubies and diamonds. The gold work is an abstract flowing design which holds seven large rubies. The rubies are not traditionally geometrically facetted but are carved and patterned in interesting irregular shapes. The late Duke of Edinburgh was a champion and patron of contemporary jewellery, and often chose exciting and modern designs over traditional ones. 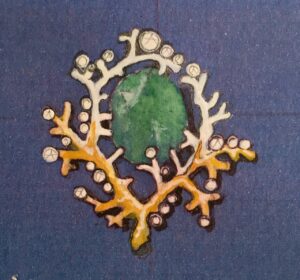 Organic form, texture and contrast were important factors in a commission I made a few years ago. The piece was based on coral-shaped branches surrounding a large and rare tourmaline. Paraiba tourmalines are bright ‘swimming pool’ blue/green and for the centre of this piece, a large oval one was chosen and cut to shape. I made the ‘branches’ out of silver and then cast them in fair-trade yellow and white gold. I hand-made the setting for the central stone from sheet and wire and let it into the framework. Finally, I made 26 diamond ‘collet’ settings,  each tailored for its specific stone and soldered  them into place around the branches. Often in very sculpted, three dimensional forms, a shiny polished surface detracts form the shapes and prevents the eye from seeing details. To prevent this, I gave the piece a satin finished using abrasive wheels. 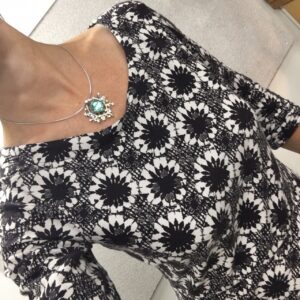 The pendant in situe.