Making rings for engagements and weddings form a major part of the working life of a jeweller. It is a privilege to be involved in the process of marking such a big event in a couple’s lives and every piece I make for a wedding or betrothal is as individual as the couple themselves.

In most cultures, the positioning of the engagement and wedding ring is usually the third (‘Ring’) finger, of the left hand. It was believed that there was a major vein running from this finger directly to the heart. Named the ‘Vena Amoris’ (Latin for ‘Vein of Love’), it was most appropriate for rings which represent the emotional matters of the heart to be close to it. Modern science has since re-mapped the human circulatory system, and discovered that the vein does not exist. Unfortunate news for the romantic suitor, but a blessing for modern medicine 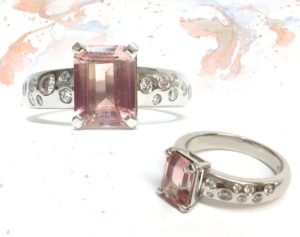 Trends appear in the jewellery world based on current high-profile engagements and weddings such as those in the Royal family. Queen Victoria was a huge influence on jewellery trends during her time. On her wedding day in 1840, she wore orange blossom in her hair, this symbolism of love, purity and fertility dates back to ancient China. It sparked a trend for beautifully hand-carved orange blossom wedding bands with delicate ‘millegrain’ (beaded) edges. More recently, Princess Eugene bought the rare and beautiful Padparadscha sapphire to the world’s notice when she chose it as the focal point of her engagement ring. First discovered in Sri Lanka, the padpardascha takes it’s name from the Sinhalese word for ‘Lotus Blossom’ and like the flower itself, is found in a range of unusual pink/orange shades. It is the rarest and most highly prised of the fancy coloured sapphires.

The question of the material value of engagement rings may well be tied to the value and psychology surrounding the promise of security, family and future. Until fairly recently in many places, laws regarding the breach of a promise to marry were in force. These laws allowed women to sue men for failing to continue with marriage plans, the belief being that the women were in some ways left less valuable and disadvantaged following a broken engagement.

Thankfully, in my daily work life, things rarely get so complicated. The budget simply needs to be comfortable for all involved. I embrace the simple approach of wanting to create a piece of jewellery that will be beautiful, long-lasting, loved and that symbolises the couple’s intention of commitment and a happy future.