When I moved my workshop to Wedmore, I began to hear tales of a rather special ring that had been discovered in the village. Dating from Saxon times, this knot ring of copper alloy wire had surfaced whilst the vegetable bed was getting an annual turn-over. But for a certain ‘je ne sais quoi’ it would have been thrown into the rubble bucket. As soon as I saw it, I understood exactly why it created the moment of hesitation that saved it from going into landfill. 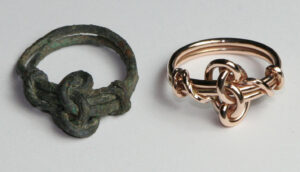 The original Saxon ring beside The Wedmore Ring

Although tired, greenish and flattened – who wouldn’t be after hundreds of years underground? – the ring had a certain presence. It was remarkably whole and the symmetrical knot-work and patterning of the barley-twist shoulders marked it apart from a discarded snippet of barbed wire.

I set about trying to understand how this ancient object was made. Try as I might I couldn’t fathom it out after that first viewing, so I had no option but to sleep on it. During the night, I had a dream; in it I was making the ring from scratch.

When I woke, I hurried to recreate the ring but, when I compared it to the original, I noticed something was wrong – I had made the knot in reverse! 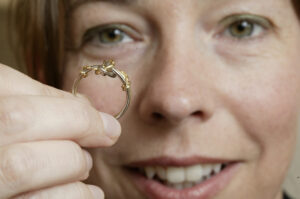 Erica and the recreated Saxon ring

As far as Saxon jewellery goes, the ring’s form and construction are simple. The shape is created and held together simply from the tension of the knot but, because I am left handed, I had instinctively turned the wire in the opposite direction of the original jeweller who I assume was right-handed.

As the ring is wrought in a non-precious metal, it would not have been created for anyone of very high ranking, but it was customary for chiefs and Royalty to give rewards in the form of a ring in fact King Alfred was known as The Ring-Giver. Even so, the ring seemed so special I decided to recreate it in a variety of coloured metals – rose gold being the nearest to its original copper colour.

Wedmore and its surrounds were thriving in Saxon times, yet only a few pieces of jewellery from that time have been found. I often wonder what else might lying in the ground waiting to be discovered by a resident digging their veg patch!