Why do we wear jewellery? There is a host of possible reasons; personal adornment, expression of personality, to bring good luck or a declaration of emotional commitment. Amongst these varied reasons, jewellery has also been used throughout the ages to symbolise an allegiance to a political group or social belief.

During the Edwardian period, pieces were designed and worn to show an allegiance to one of the most significant changes taking place within our political system – women rights. As the Suffragette movement (WSPU) gathered force, so did the production of jewellery worn in support of it and it became a way for British Suffragettes to identify each other. 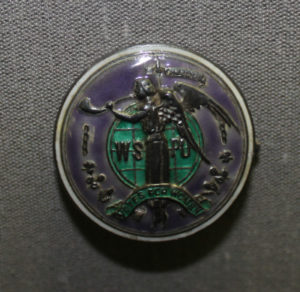 The Suffragettes had specific badges and brooches that were directly related to their political union. These were usually silver, decorated in enamel and had an inscription of the political party on the front. Whether the jewellery was home-made, mass produced, or created as a one-off by the finest Bond Street jewellers, Suffragette pieces had the common instantly recognisable factors being decorated with the colours green, white and violet. The first letter of each colour, G, W, V reflected the demand of “Give Women a Vote”. The WSPU adopted these colours for their identity. 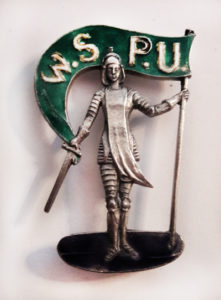 The Victorians had started a trend to give hidden meanings and messages to things such as flowers and colours – each was often a symbol for an emotion or characteristic. The Suffragette colours green, white and violet of “give Women a Vote” had a meaning, green for hope, white for purity and clarity and violet for loyalty. From a design perspective, the colour combination is a strong one and was never going to fall into the background!

I feel the best of the Suffragette jewellery has elements and qualities that can also be seen in their wearers. Strong, bold, dramatic – yet dignified – a fitting description of these pieces of jewellery and the women who wore them!