One of man’s oldest gemstones, pearl, is uniquely plucked from the sea rather than dug from the earth. Formed from the bruising of and reaction to an irritant, a pearl is formed within an oyster’s shell to protect their fragile and vulnerable bodies from permanent damage. An oyster coats any intruding grain of sand or parasite with layer upon layer of soft and glossy reflective ’nacre’. This nacre is the same substance that lines and smooths the inside of their shell, where it is known as ’mother of pearl’. A pearl requires no shaping, cutting or polishing – it is perfect from the moment it is discovered.

Pearls come in many shapes, sizes and colours depending on the mollusc which has formed them and their environment. They are found in seas and freshwater lakes all over the world, such as in Japan, China and Australia. Some pearls are naturally coloured such as the black and grey Tahitian pearls. South Sea pearls are shades of white and gold. Freshwater pearls are found in shades of white, cream, peach and pink. 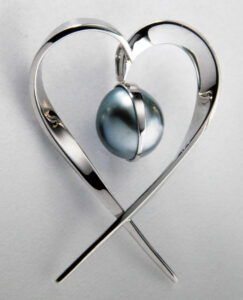 “Life is made up of a few moments all strung together like pearls. Each moment is a pearl, and it is up to us to pick the ones with the highest lustre. If we do not have time to do great things, take a few gentle moments and do small things in a great way” – Joyce Hilfer

In the 1920’s cultured pearls were introduced into the market and brought about a big change in pearl fashion and who could afford it. Farmed oysters are opened and a nucleus is planted inside the shell. Traditionally this was a round mother-of-pearl bead, but different shapes such as crosses or discs work just as well. They are then returned to the water and left for several years to coat the bead with nacre and produce a pearl. The same can be done with freshwater pearls; the molluscs that produce these can create about 20 at a time, so producing a less expensive option to marine pearls.

As a jeweller, working with pearls is a mixed experience and depends on the piece of jewellery being made and how the pearls are used. With fully-drilled pearls on a necklace or bracelet, the stringing process is relatively straightforward and blood pressure remains fairly low. With large valuable pearls such as South Sea or natural pearls, however, the stakes are raised. 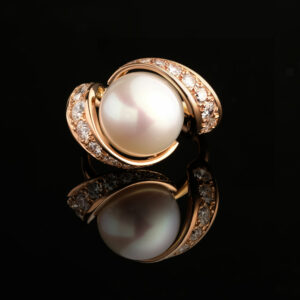 Jewellery using these beauties usually features them as the focal point and requires them to be drilled so they can be attached to the metal-work via a hidden pin. Like working on a precious tooth, one touch of the drill in the wrong place means disaster. A pearl is like no other gem in regard to its vulnerability when being worked – if jeweller and pearl survive the creative process to make a successful piece, that jewel is certainly worth cherishing.