Making rings for engagements and weddings forms a major part of the working life of a jeweller. It is a privilege to be involved in the process of marking such a big event in a couple’s lives and every piece I make for a wedding or betrothal is as individual as the couple themselves.

So much of the couple’s identity and personalities can be reflected and incorporated in their wedding and engagement rings. The rings can be made as a set to compliment each other, or be as diverse as chalk and cheese.  A wedding ring can be made to fit around an engagement ring, or two wedding rings can be made to interlock with each other. Personal dates and messages can be engraved on the inside of the bands, and I have occasionally set diamonds on the inside of a band. Although unseen from the outside, these have symbolised something special to the couple or united the husband and wife’s rings with matching stones. 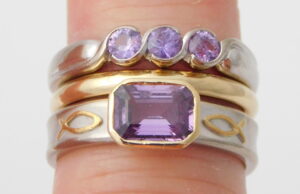 Something to bear in mind when buying or making an engagement ring, is how a wedding band will sit against it for many years to come. On a practical level, a wedding band that doesn’t lie well with its fellow rings can wear out and become worn, causing a lot of damage over the years. It can also be uncomfortable.

One such recent commission I made featured wave-themed rings. I had designed and created the engagement ring as a surprise several years ago – a beautiful natural sapphire and diamond within an asymmetrical wave shape of platinum. As a personal touch to link the couple’s wedding bands together, I added an engraved line that followed the exact profile of the wave on the inside of the husband’s band. Initials and date of the wedding are also engraved inside each band.

Traditionally in Western culture, a third ring is often added to a wife’s engagement and wedding rings. The eternity ring is given after marriage, either on a significant anniversary, or the birth of a child. It usually consists of a complete ring of small glittering diamonds or other gemstones, often the same size and shape, running all the way round the finger – without beginning or end. 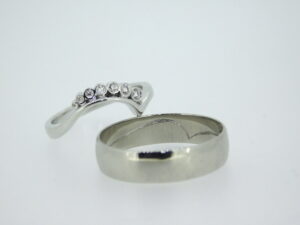 Husband and wife bands. The engraved line in side the husband’s band follows the exact profile of the wife’s wave.

As the years go by I see a refreshing shift in the tradition of betrothal jewellery, with couples wanting the form to express their own unique place in the world and meaning to each other. Alternative materials, colours, designs, personalisation and story are a delightful palette for a jeweller to work with.