An eternity ring usually consists of a complete ring of small glittering diamonds or other gemstones, often the same size and shape, running all the way around the finger- without beginning or end. Queen Victoria notably chose a very unusual engagement ring- a snake, encircling the finger, eating its own tail. Inspired by Greek mythology this figure, known as an ‘Ouroboros,’ is an ancient symbol of eternity, immortality and continued renewal of life. Victoria’s snake ring was gem-set, with an emerald in its head (her birthstone) and diamonds along its nose. The sentiments of never ending love and good fortune that this ring represented are those that modern day eternity rings now hold. 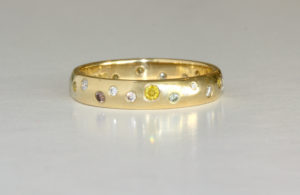 Traditionally an eternity ring is given after marriage, either on a significant anniversary, or the birth of a child. Stones running all the way around a ring cause an inevitable amount of bulk and depth which can be uncomfortable to wear, and might not be practical. They are also quite an investment. Thankfully, there is an alternative! 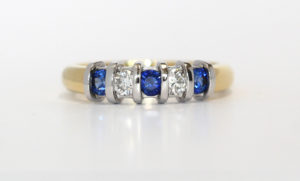 I often detect a shimmer of relief in the countenance of a commitment-shy customer when I explain that there is also such a thing as a ‘half eternity’ ring! Not to be confused with a half hearted show of commitment, a half eternity ring simply describes that only the top half of the ring is set with stones. Diamonds are the hardest-wearing gemstones, so make an obvious choice for a ring that is going to be worn all the time.

The Oak leaf ring that I created as an eternity ring shows a random scattering of natural yellow and cognac diamonds. The oak leaves are created using a process of lost wax casing in 18ct Fairtrade red gold, and the setting for the diamonds are made of platinum for strength. The oak symbolises wisdom, strength and endurance- perfectly encapsulating the sentiment of an eternity ring. 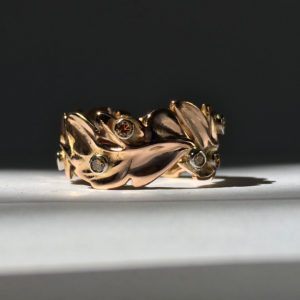