While weddings have more or less ground to a halt due to the COVID pandemic, those who are already married are still celebrating their anniversaries and I have been delighted to have worked on some lovely commissions over the summer to make pieces that help commemorate these special dates.

One such commission was the restoration of an engagement ring for Mr and Mrs Kingston. On initial inspection of the ring, I found that it was very worn indeed and no wonder as it was being restored for their 80th wedding anniversary! 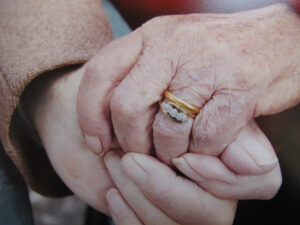 The Kingstons who celebrated their 80th wedding anniversary this summer. The engagement ring that started the whole thing off is fully restored for the occasion.

Mrs Kingston told me how ring held enormous sentimental value to her and her husband. So, with that in mind I set about restoring the ring whilst trying to keep the work as original as possible. It is always lovely to use the original gold from a piece, especially if it has such a high sentimental value. With the addition of a little more gold to make a more robust shank that would be in similar in proportion to the original when it was new and the reworking of the platinum beads that held the stones in place, the ring was restored.

I delivered the ring a few days before Mr and Mrs Kingston’s anniversary. On the day itself, the press, including the BBC were there to celebrate the big day!

Mrs Kingston told me she ‘was thrilled with the ring and so pleased to show it to people’ on her and her husband’s special day.

Another ring that I was commissioned to make was for a couple’s 60th wedding anniversary in July. Naturally, the couple wanted diamonds to feature on the ring for this diamond anniversary.

For the design they were drawn to the granulation work that I do as well as the coastal inspired work that I have done in the past – contrasts of textures, colours and patterns. 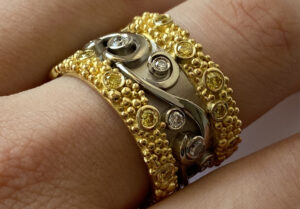 The design was made in 22ct Fairtrade yellow and white gold with yellow and white diamonds added in varying sizes for a ‘sprinkled’ effect. The granulation of the yellow gold is painstaking work but worth it for the amazing shore-like effect that it produces.

My customers were very pleased with the resultant ring. In times like these, when our contact with family and friends has been heartbreakingly restricted, the pieces seem to have taken on an even deeper significance in marking a special occasion between couples.